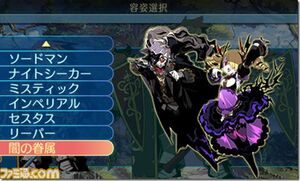 The Vampire is an unlockable pseudo-class unique to Etrian Odyssey Nexus. It is unlocked by completing a precise set of prerequisites, talking to a bar patron, and finding an item in the Eastern Ruins.

The Vampire is not a real class; instead it is a set of Force skills, stat boosts, and innate class passives that are applied to any character equipped with the Scarlet Evil Eye accessory. Unlocking the class also unlocks a pair of unique portraits to be used in character customization.

The Scarlet Evil Eye is an Accessory that will change that character's pupil color to red when equipped. Moreover, your HP will slowly drain during the day due to absorbing sunlight, and will recover at night due to the moonlight. Furthermore, your Force Boost and Force Break effects change greatly when you become a member of the dark tribe. Upon removing the Scarlet Evil Eye, the body composition and Force effects return to normal, so feel free to try it without consequence.

In addition to these features (details below), equipping the accessory will give the character +100 HP, and raises all their other stats by 10% of the base amount. Vampire characters featured on a Guild Card will appear as a black silhouette surrounded by purple smoke and cannot be recruited.

There are currently three known methods for unlocking the Vampire:

After completing any of these three methods you must save, exit, and load the game. Exiting the Inn will trigger a prompt that adds the Young Gossip Hound patron to the Bar. Talk to your newly unlocked patron to activate the quest and proceed to the Eastern Ruins.

Upon talking to the Young Hound Gossip for the first time:

Hey, so according to my grandfather's uncle's... dad's cousin's relative's dad's grandfather's... Um, wait--was that right? Anyway, some old relative of mine once learned about the Lemurian secret to immortality. Do you wanna hear it?

[Prompt: "Yeah, tell me."] Sure--so this old relative of mine lived across the street from this girl with red eyes, as well as her father... The girl never went outside during the day. And, no matter how many years went by, she always looked exactly the same age. Over time, the girl's dad grew old, and he eventually died of natural causes. But here's where it gets strange: apparently the girl died on the same day her father did. And it gets even weirder--so, my old relative spoke to her dad once.... And supposedly, this is what he said... "The eyes of eternity rest beneath the bat..." I still remember those words exactly. A demonic eye is supposedly their secret to immortality--but, if you handle it carelessly, you'll be struck with the greatest misfortune. And there you have it. Honestly, I have no idea what the hell my relative was going on about. I was actually on the verge of forgetting it. Still, the Lemurian secret to immortality sure deos make for good tavern talk. Those rumors have been passed down over so many generations--and here I am, gossiping the same way, like my family always has... ...But I still have no clue what he meant by "the bat."

After interacting with the bat in A1:

Could whatever the young man told you about be under this bat? You decide to slowly dig up the spot under it... ...... After digging for a while, you come across a small metal box. [Obtained Darkness Yearning!] Within the box is an ancient-looking note. You carefully turn over the page... "I'm conducting research on Lemurian immortality. Using various folklores around the world, I hope to bring humans closer to immortality. The entire reason I'm doing all of this is... for my daughter. She's still young, but her life is nearing its end due to a terrible illness. I plan on finding the power of immortality... before it's too late." At the bottom of the note, you see something written in red, in a different script than before. "To the one who seeks the Scarlet Evil Eye: Walk five steps east, then five steps south from here."

After walking over the correct space in B2:

You arrive at the destination described in the note... You don't see anything around you, though. Is this the place? You decide to slowly dig into the ground below you... ...... After digging for a while, you come across a small metal box, similar to the one you found before. [Obtained Darkness Seeking!] Could the ancient note found in this box be a follow-up to what you read previously? You carefully turn over the page... "People will most likely laugh if they're told that they can unlock latent abilities that will surpass current human capabilities. But... I've finally found it. The terrifying power that's been used since ancient rituals... This power is initiated within a person's eyes, It begins by enveloping the cornea, and slowly, eventually converts all of the cells in the body. The converted ones fear light and become something akin to a vampire... a dark tribe that is, for all intents and purposes, immortal. By utilizing a range of scientific procedures, I have made this terrifying power available for universal use. It has been incorporated into a contact lens. By doing so, the user can utilize the power whenever they please. I call it the Scarlet Evil Eye... I believe that I can use it to finally save my daughter." At the bottom of the note, you see something written in red, in a different script than before. "To the one who seeks the Scarlet Evil Eye: Walk four steps east, then four steps north from here."

After walking over the correct space in A3:

You arrive at the destination described in the note... You don't see anything around you, though. Is this the place? You decide to slowly dig into the ground below you... ...... After digging for a while, you come across a small metal box, similar to the one you found before. [Obtained Darkness Dwelling!] Could the ancient note found in this box be a follow-up to what you read previously? You carefully turn over the page... ...... "A long time has passed. My daughter and I have continued to live here, while the people of Lemuria have all left... However, my life is about to end... and my daughter says that she will die with me. My daughter, alive only due to the Scarlet Evil Eye, has no one other than myself. She says that she will remove the Evil Eye and end her life with mine... That very well may be the best resolution for us both. I plan on leaving this marvelous yet horrendous power with this land that brought me to my daughter's salvation. If there's a life you absolutely must save, like how I once did, you should make use of it. You who have studiously unearthed my notes: I shall bestow unto you the Scarlet Evil Eye. I believe its power will be a boon to mankind." Along with this note, you acquire a small lens dyed in crimson red. [Obtained Scarlet Evil Eye!] Whoever wears this gains the night-immortal power of the dark tribe, as described in the ancient notes...

Upon entering the Inn with a character equipped with the Scarlet Evil Eye for the first time:

Upon entering the Shop with a character equipped with the Scarlet Evil Eye for the first time:

Napier: Oh? Is it me, or are [character]'s eyes rather bloodshot? You ought to use eyedrops for that. In fact, you can buy them right here!

Upon entering the Bar with a character equipped with the Scarlet Evil Eye for the first time:

Kvasir: There are two kinds of adventurers: the ones who are sleepy, and the ones who aren't. If you're sleepy, you should sleep. If you sleep, you'll eventually wake up. What's that? You're not really sleepy? Well, all right then.

Upon entering the guild with a character equipped with the Scarlet Evil Eye for the first time:

Mueller: Wha--who's there!? Oh, it's you [guild name] Guild. My apologies... I-I thought I sensed an inhuman presence. But, I can still feel it nearby... No, it must be my imagination. Now, what brings you here?

The Vampire features an alteration to the character's Force Boost and Break, which is the major factor in determining which class best synergizes with it.

Retrieved from "https://etrian.fandom.com/wiki/Vampire?oldid=40234"
Community content is available under CC-BY-SA unless otherwise noted.