Their golden armour gives them unequaled defense, while their spears provide a strong offense.

The Hoplite is a defensive class from Etrian Odyssey III: The Drowned City. They are the party's defense specialists.

Like the Protector from previous games, the Hoplite (known as Phalanx in Japan) boasts a formidable defense and an array of skills to keep the party from taking too much damage. They can wear Heavy Armor and use Spears and Shields to great effect and possess skills to draw enemy focus or take damage for another party member.

With the highest VIT of any unit, Hoplites were bred to take any damage that comes in their general direction. Unlike the Protector, the Hoplite has a wider attack pool, but no healing skills except for the self-sufficient Recuperate, which strengthens a Hoplite's Defend command, by recovering a set amount of HP. The previous Front Guard and Back Guard have been amalgamated into a single skill: Line Guard, which lessens damage taken of any selected row (but more effective when the Hoplite is in that row). They have lost the incredibly useful Antiall but retain Antifire, Antiice and Antivolt. They can sacrifice health for extra damage resistance with Selflessness. They can also use Switch Stab (which allows them to switch rows if there is space), Blitzritter (volt/pierce attack) and Long Stride (which hits all enemies). Naturally, they still have the Provoke skill of their "ancestors". which leads to both Parry and Magic Parry.

Does not include any stat bonuses from skills, equipment, Books, or Retirement.

Note: Skills are listed in the same order that is used in the game and do not necessarily unlock one after another. See the "Requires" column to see how to unlock a skill. If that column has dashes in it the skill is accessible at level one; no other skill is needed to unlock it. Skills are normally maxed at level 10, but there are some exceptions where the level cap is 5 or even 1.

Ninja: Ever the premier option for support classes, Ninja gives you the ability to use two antielements in a turn, or an antielement plus a line guard, or to cover a low-HP member from all damage while still giving protection to everyone else, or or etc. etc. As a bonus, once you've maxed out your desired tanking skills and have clone shenanigans online, you can then proceed to invest in Senpuku to make your big armoured lug also be nigh-unhittable. Real strong choice for any party not already using their sixth slot.

Farmer: Persistence is nice to have around, though its a kind of large investment considering how costly the Hoplite's full kit already is.

Monk: Waking Chakra is really helpful: For a lot of teams, an incapacitated Hoplite can be very problematic. You can probably ignore this if you have someone with Prevent Order though.

Shogun: Pretty much the same thing as Farmer, but with Endure instead, trading more resilience when maxed for less SP required to do so. 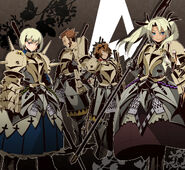