Etrian Odyssey Untold: The Millennium Girl (新・世界樹の迷宮 ミレニアムの少女 Shin Sekaiju no Meikyū: Mireniamu no Shoujo, lit. New Labyrinth of the World Tree: Millennium Girl) is a remake of the first Etrian Odyssey game and the start of the Untold spin-off series. Release wise this is the fifth game under the Etrian name it was proceeded by Etrian Odyssey IV: Legends of the Titan and followed by Etrian Odyssey 2 Untold: The Fafnir Knight a remake. Like all the games in the series that came before it, it is a first-person dungeon crawler roleplaying game. However, unlike previous games, there are two different modes you can play in. In Story Mode, you have a pre-made party along with voice acting and a more in depth story. In Classic Mode, there is a option to make your own party and thus play it like a typical Etrian Odyssey title. A demo was released on September 16, 2013 for NA.

After mapping the floor and proving himself a worthy adventurer, he is then sent to investigate an anomaly--earthquakes that seem to be coming from a nearby ruins of Gladsheim. It is here that he meets four others, Simon, Raquna, Arthur, and Frederica. Simon, Raquna, and Arthur were exploring the ruins on behalf of the Midgard Library. They decide to team up with the Highlander in order to further their investigation. Frederica, having no memories of her past or why she appeared out of a strange capsule in the ruins, decides to join the other four, hoping to regain her memories.

They set off as a guild in order to explore both the Yggdrasil Labyrinth and Gladsheim, hoping to uncover both the secrets of the ruins and the key to unlocking Frederica's memories.

Spoiler Warning: Plot details follow. Read at your own risk.

One of the main characters of the game's Story Mode. He was entrusted by the leader of the Highlanders with the mission to solve the Yggdrasil Labyrinth's mysteries. Much like the protagonists in most other Atlus games, he doesn't talk in the game, but you can select choices of the speeches he gives. Despite this, he also has his own voice tracks, like grunting noises or him calling the names of his companions.

A girl from thousand years ago who is involved in the Yggdrasil Project. She volunteered to be sealed away so that she could wake up a thousand years later (the time period the player is in), recover M.I.K.E, then save the world from the 'calamity'. As the world has changed and the remains of Tokyo had been transformed into a labyrinth, she struggles to get used the current environment even with the help of the Highlander, Simon, Raquna and Arthur.

A researcher sent by the Midgard Library to investigate the 'calamity'. He is a skilled Medic, and the smartest of the trio that were sent. According to the game's backstory, he and Arthur were involved in a disaster that struck their hometown, which was mainly due to the calamity.

The second researcher sent by the Midgard Library. She is a Protector. Although not as smart as Simon, she is rather intelligent and has much more common sense than Arthur. Raquna loves drinking- most of the time, when you complete quests or missions that provides to the plot, she suggests going to the pub to drink. On one occasion, Simon comments that her reason of going to the pub 'to celebrate' was just an excuse to drink.

The third researcher of the trio sent by the Midgard Library. He is a powerful but rather playful Alchemist who loves joking or messing around. According to stories later on, it is revealed that he never had parents - or doesn't remember it due to the disaster that struck his and Simon's hometown, which caused him to lose his memories. Although he messes around a lot, he looks up to the Highlander a lot and believes that with the Highlander, they can accomplish their goals.

The Chieftain of Etria. He works hard to keep the town in peace and makes sure that the citizens are happy with their lives. He is also, ultimately and in a way, one of the main villains of the game. Visil is the man who started the Yggdrasil project. Having hypothesized that disaster may happen, he developed a serum to destroy the core. For a thousand years, he has waited for explorers brave enough to be able to defeat him- to which he meets the Highlander. Visil is cursed with immortality (in age) due to being infected by Yggdrasil itself.

M.I.K.E, short for the Memetic Installation Keeper Engine, is a machine from thousand years ago who befriended Frederica Irving soon after her father disappeared. After being awoken by the Highlander, Frederica and the others in the present time, he helps them with information about the Yggdrasil Core and such. His sole purpose was to awaken in the current time period and activate Gungnir- a device that could possibly eliminate the Yggdrasil Core, but would definitely kill lots of innocents- mainly involving the town of Etria, a method which the protagonists disagrees with. Despite later conflicts, he still remains as friends with Frederica after she deactivated him.

A man who works at Radha Hall. He will be the one who gives out missions.

The one who allows adventurers to organize their guilds and to change classes. He can be found at the Explorer's Guild.

The bartender and owner of the Golden Deer Pub. She will post quests here that other citizens living in Etria post, allow the guild to rest after a long day of adventuring, and encourage small-talk with the other patrons.

A maid from the Sheldon household sent from Raquna's father to assist the guild. Upon arriving, the guild will have the Sheldon mansion in order to use as a base. She will hand out requests, prepare drinks that give extra boosts, evaluate and synthesis Grimoire stones, and manage items.

A detective that seems to have a reason for visiting Etria. First meeting him at the Golden Deer Pub, after he goes missing a few times he will set up residence at the mansion, where along with the duties of Guildkeeper, will tell stories which will then turn to useful plans that can be used in battle.

The priestess of the Forest Folk tribe, who originally tries to keep the guild from going any further down the Labyrinth. After Iwaoropenelep is defeated, she will grow weak and be taken to the mansion, where after she is taken care of will take up roll as a Guildkeeper. Along with the standard duties, she will give the assistance of the forest folk and monsters to help out in battle.

The owner of Shilleka's Goods, where she will sell armor, weapons, accessories and items every adventure needs. However, she cannot create without materials, so she depends on adventurers to sell the ingredients from the Labyrinth to her.

The owner of the Rooster Inn. He allows adventurers to stay until either evening at 7PM or morning at 7AM. He also has a clinic where adventurers can remove their ailments. 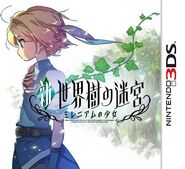 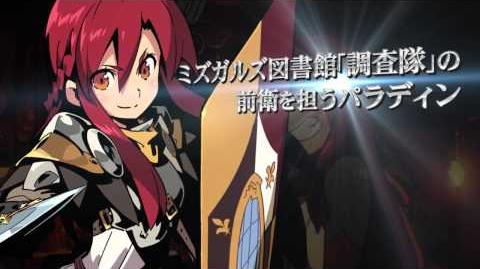 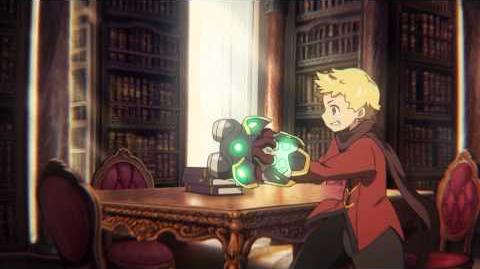 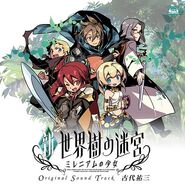 Rosa and Austin in the Opening.